Transitioning Your Baby From a Bottle to an Adult Cup 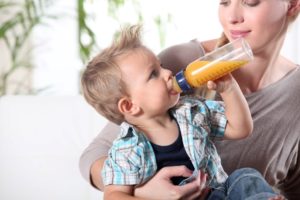 If you are currently bottle feeding your baby, then you may wonder when you should wean your baby off the bottle and what type of cup you should introduce to them first. While pediatricians have traditionally advised weaning babies off their bottles between 12 and 18 months of age, some babies are ready to begin the transition from bottle to training cup by as early as 6 months of age.

Most babies are ready to make the switch when they can sit upright and eat foods you serve them on a spoon.

There are several advantages to weaning your child from the bottle early, including lowering the risk of tooth decay and a reduction in ear infection risk — sucking on a bottle nipple causes negative pressure in the ear that can lead to fluid build-up and infection.

In addition, it can be more difficult to break the baby bottle habit the older your child becomes because babies become increasingly attached to their bottles as they age.

Read on to learn about the dental hazards of some traditional sippy cups, dentist-approved sippy cup alternatives, and how to keep your babies teeth healthier while they drink from any training cup.

The American Dental Association (ADA) recommends against the use of sippy cups that require your child to suck when drinking from them. These cups are typically equipped with valves under their spouts.

While the valves may prevent spills, they promote suckling and get in the way of your child developing the important skill of sipping from a cup. Sippy Cups without spill-proof valves are a much better option.

However, you should encourage your child to sip from this spout and not suckle it with their tongue placed tightly under the spout. Suckling on a sippy cup spout made of hard plastic can hinder normal oral development, leading to problems with speech and orthodontic problems, such as the development of an overbite or underbite.

To avoid the worry that a sippy cup will interfere with normal oral development, many dentists and speech therapists advise parents to skip the sippy cup altogether and introduce a simple, open-mouth plastic cup to their children instead. This cup can be introduced at the same time you would introduce a sippy cup.

While there is a learning curve to using this style of cup, it pays to patiently teach your child to take small sips from the cup and eventually hold it on their own.

Alternatives to the sippy cups you can also use that do not hinder appropriate oral development include:

Remember that any training cup should be used for just a short period of time while your child is learning to drink from an open-mouth cup without spilling.

First, don’t let your child walk around sipping any beverage that contains sugar all day long, including milk that contains a natural form of sugar called lactose. Instead, have your child drink sugary beverages from the cup during meals and snacks only. This decreases the time your child’s teeth spend in contact with the cavity-causing sugar in the beverages, potentially decreasing their cavity development.

Also, only allow your child to drink from their cup when sitting down; if your child falls while drinking from the cup they could injure their mouth and/or teeth.